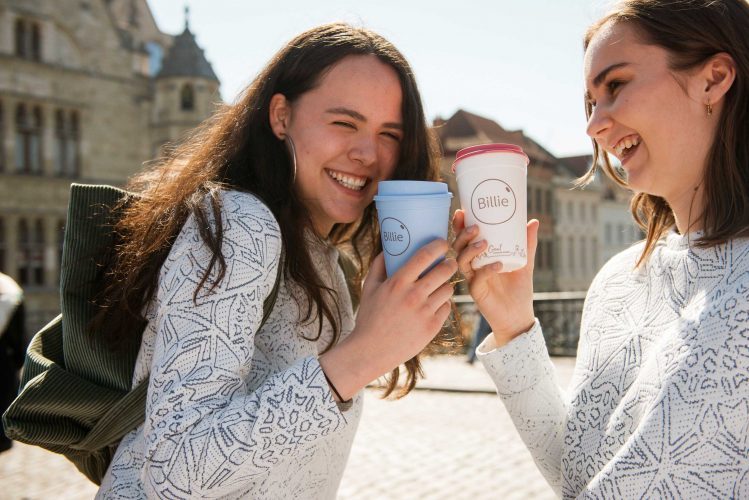 On the 1st of May the second edition of Mei Plasticvrijwas launched. This public campaign encourages Belgians to reduce their plastic consumption during the month of May. Excellent timing for the launch of the reusable coffee cup Billie Cupin Ghent. People who pay close attention, will also spot §2.SWEATERs in the images of the launch.

The public campaign Mei Plasticvrij This campaign on the ecological impact of plastic consumption aims to reduce the use of disposable plastic for one month. That was music to the ears of Ineke Van Nieuwenhove (the woman behind Mei Plasticvrij) and Vanessa Debruyne, the creators of the new reusable cup Billie Cup. They considered Mei Plasticvrij the perfect opportunity to introduce their product.

A new system for reusable cups

Since early May, in about 20 restaurants and shops in Ghent, a Billie Cup is available, which can either be reused or redeemedin one of the participating shops, so that customers can recover their paid deposit. This is how Ineke and Vanessa not only aim to reduce the number of disposable coffee cups, but also provide an alternative to distracted coffee drinkers whose reusable cup is still on the counter. We feel you.

Reducing the number of disposable coffee cups is a matter of urgency. Coffee cups usually consist of a mixture of paper and plastic,making them non-recyclable and taking about 30 years to decompose. With one coffee, you create 30 years of waste. Every year about half a trillion cups are thrown away worldwide. Unbelievable, imagine that waste mountain!

It should come as no surprise that Billie Cup and Studio AMA were able to connect with each other's stories. Just like in the world of instant pre-train coffee, there is also in the world of fashion a deep-rooted throw-away culture.The average fashion brand produces as many as 50 collections a year, which are often thrown out of one's wardrobe just as quickly as they got in. Just think of the last item you bought yourself. How often do you really wear it?

The encounter between the two disposable allergic initiatives can be traced back to the MISS election van de Startersfabriek, de Sociale InnovatieFabriek en De Punt. Daar vielen zowel  Billie Cup als Studio AMA in de prijzen, als two of the ten most inspiring social starters in Ghent. Both startups are looking for solutions for an ecologically responsible lifestyle. When Ineke and Vanessa started looking for the right looks for the Billie Cup campaign, a collaboration soon was born.

At Studio AMA, we are very grateful to be able to contribute to Billie Cup's ambitious mission to change the world of coffee.